Where to Find Us

If you purchase a puppy from us we invite you to post to our FB page.  We would love to have you share pictures and the fun you have with your dog.       ﻿

"It is our policy to give service after the sale....we are always glad to answer any questions that you might have."
﻿﻿ 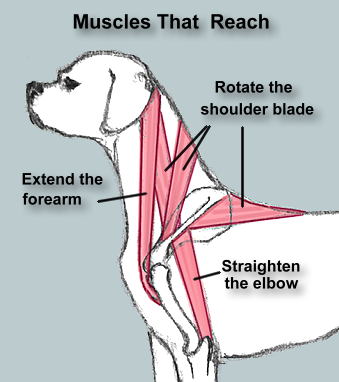 Why do some dogs have a long smooth stride, and others have a choppy gait, with little front reach?  If you examine the shoulder, you usually find the answer.  The front assembly of the canine is not attached in the same way as the human. Humans have the collar bone or clavicle which runs between the shoulder and the breastbone. The clavicle attaches to the shoulder at the acromio-clavicular joint, and attaches to the breastbone, or sternum, at the sterno-clavicular joint. This rather flimsy arrangement leaves the major part of the attachment of the upper extremity assembly to muscles, but does supply some mechanical (bony) rigidity to the apparatus.

In canines, there is no collar bone. The front assembly literally floats on its muscular and ligamentous attachments. This arrangement suits the need for maximum cushioning and flexibility of the front end of a predator which must catch its fast moving prey. The human needs more stability because his main implement is his hand, and he does not need the impact cushioning because he does not run on all fours.

The function of angulation - the bones folded at angles to one another - is twofold. The most obvious function is that of enabling alteration of the position of the component bones so that the dog can move, and providing levers upon which the muscles can exert mechanical force.

The second function is that of shock absorption. The front end bears about 65-75% of the dog's weight. The angles between the bones of the front limb and shoulder act as a series of leaf springs to absorb the shock of gaiting.  Without these shock absorbers, the front would quickly break down. Thus the shoulder in the canine infant starts out rather short and upright, for maximum strength in weight bearing, and only later, as the animal uses its running gear for several months or even a year or more, do the muscles mature and define the adult shoulder placement. The shoulder muscles and the angles between the bones develop by responding to the need for shock absorption during the stresses of gait.

The first diagram shows the principal muscles which move the front leg forward.  There are many other muscles besides the ones shown, but together they all perform the major functions shown.

The most important joint is the sacpulo-humeral joint. It controls the amount of extension of the shoulder by means of a notch on the top of the humerus. This joint can never open to 180 degrees as a result of this limiting notch, which stops it about 15 degrees short of 180. Thus the maximum angle of the upper arm very much depends on the angle at which the shoulder blade is set on the body.

The shoulder blade can rotate up to 15 degrees from the static position, which in the well angulated shoulder is about 30 degrees (to the vertical). This angles the shoulder, when you add the 15 degrees of additional rotation at maximum extension, to 45 degrees - the angle of maximum stride length. (see fig 3)

Look at the lack of balance in the musculature of the dog with an upright shoulder blade. The areas of attachment of the muscles are limited because the angles are too steep. The angles at which the muscles act limits their mechanical advantage as well.

Dog A. will be able to move easily on a loose lead with his head held at a 90 degree angle to the axis of the shoulderblade. He will have a long stride, and a fluid gait which appears effortless. He always looks good - on or off the leash.

Dog B. has trouble extending his front legs. Because of the steep shoulder, he needs to lower his head to gain effective use of the muscles which move the leg forward.  He will tend to "hang" on the leash to assist himself in getting the front end airborne.  Left to his own devices, he will tend to move with considerable vertical bounce, and with a lower stationed head. Because of the shortened front stride, the rear will tend to kick up behind, rather than reach under the dog.  This dog, if trained to tolerate being "strung up" on the leash, may look very flashy in the ring, as his handler helps him get his front off the ground, the rear is then free to propel him forward.